Beam is my favorite event to coach (most days).  In my head, everything on beam should be easy, it has all been mastered on the floor before it goes on the beam.  However, beam is not easy!  Beam is all about confidence, focus, and mental strength. Competitive Team is an all around sport - so let's talk about how to build up your athletes to have the most success on the balance beam.

To Spot or Not to Spot?

I have used several different techniques when coaching beam.  However, I have found that the one that works best for me is not spotting.  I do not spot any skill on the beam be it a low or high beam and I do not "just stand there."  While sometimes this takes the athlete a little bit longer to get to a high beam it results in a much higher level in confidence when the skill has been completed.  It also tend to result in less frustration and tears.  I have found it helps with keeping the skill longer as well, because when they have a fall they know how to rebuild their way back to the high beam.  The athlete must learn to trust themselves and their ability in order to move up to the next beam, rather than relying on me.

Since I do not spot, I use the build up strategy.  The gymnast moves from low to high, fat to thin, and soft to hard.  (Keep in mind beam is scary because it is high, hard, and narrow.)  Eliminate each factor one at a time and beam becomes much less stressful.  In fact, you will find that it becomes a game or challenge to see which athlete can creep their way to the top the quickest.  Keeping in mind that encouraging an athlete to move to the next progression when they are ready physically is great, but pushing them when they aren't ready mentally will often backfire.

Here's one of my favorite beam challenges that can be used with any new skill.  I typically set the timer for 10-15 minutes and see how far the gymnasts can get.

The rules are that the gymnast must make 3 on each progression before moving to the next.  Once they make 3 they can either move to the next progression or they can go all the way back to start.  This ensures they can not get stuck in one spot the whole time.  Last, no progression can be skipped.  I normally have 8-12 progressions set up. Below are a few I like to include - starting with the easier progressions and advancing to the harder. 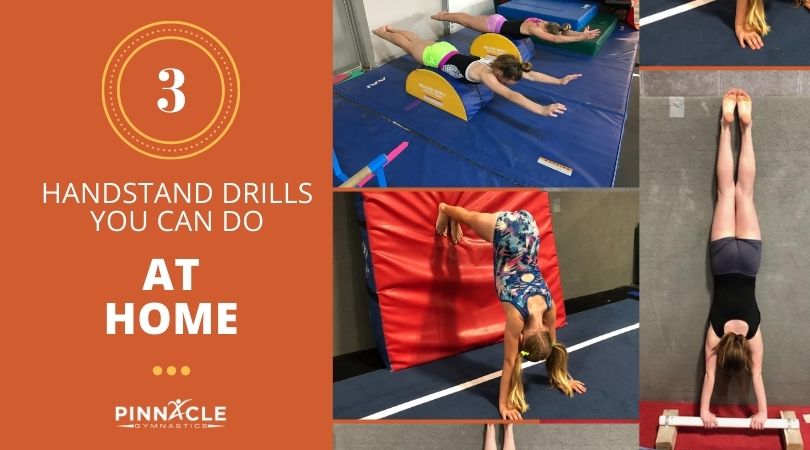 3 Handstand Drills You Can Do At Home