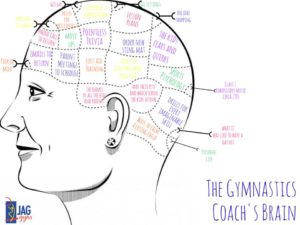 We recently posted an article that discussed the parental chatter on the side lines when less athletic kids are put into the game, especially at a crucial moment. This got me thinking (I'm sure you will find it somewhere in my brain map to the right) about my proudest coaching moment, and oddly enough, I wasn't coaching gymnastics at the time.

I began coaching my oldest son's soccer team when he was 5.  Not because I was an expert in the sport, but because I knew I could get a group of 5 year old boys organized on the field, improve their gross motor skills, and teach those basic human functions. And they had no one else to do it...

So after getting blown out our first game (and most of our first season), our team started to improve.  Quite rapidly actually.  The boys were working as a team, even as (then) 6-year olds.  We went from the bottom of the pack to the top.  We even got to the point where we occasionally had to implement number of pass rules, score with your left foot, or other exercises to keep the score respectable. During one particular game, we decided to make it our team goal to get one of our weaker players to score. 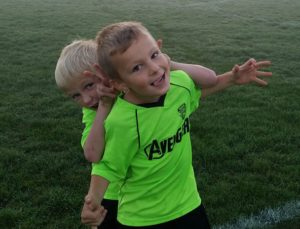 This is not an easy concept for children to understand.  You teach them to be aggressive on the field, get the ball, score!  And now you are teaching them in that same moment to stop and think about how to get a particular player the ball.

They ran down the field, passed the ball to the target player.  If he would miss, they would frequently just get the ball again and forget about our goal, scoring themselves instead of trying again.

And then it happened.

Grant got a breakaway.  Ran and dribbled all the way down the soccer field.  There were no goalies at this level.  He had a clear opportunity to score.  And he stopped. He stopped himself.  He stopped the ball.

He stopped right in front of the goal.

He called the player's name while guarding the ball.  The player ran to the ball and scored.  From point blank range - boom - into the net.

The boys went crazy in celebration as I fought back my tears of pride.

My son and those boys learned more that day than they had the entire season.  They learned what it meant to help someone, to be empathetic, to give more than you take, to work toward a common goal.  That moment will forever main as a "core memory" as Joy would put it.

You see, coaching children is more about child development than sports prowess (at least 90% of the time).  We aren't focused on creating superstars when we form lines, create warm up routines, or layout expectations of how class will go.  We are trying to teach them to be human.  To do things for themselves.  Work as a team to get mats in place, count the number of repetitions they do, be honest, work hard, and push themselves to be better each class.

Now these things do help create amazing athletes, and I have had the privilege of coaching a couple to the true pinnacle of our sport, college gymnastics.  But as I work toward molding the next round of college eligible athletes, I go back to the beginning.  Without teamwork, work ethic, routine, and honesty, their goals will never come to fruition.