USA Gymnastics Scandal - Who, How, and Never Again

When we think about USA Gymnastics, most of our memories turn to Olympic greatness.  From Mary Lou, to Shannon Miller, to Simone Biles and the Final Five.  However, recent news places USA Gymnastics at the front of a sexual abuse scandal.  One involving the team doctor of almost 20 years and sexual abuse allegations by an estimated 119 women.  This USA Gymnastics scandal is disappointing (to say the least) to the hundreds of thousands of members and athletes operating under USA Gymnastics as stewards.  Using gymnastics to teach life lesson through sport.  Building healthy relationships that empower the next generation.  However, the commitment of members and the governing body to correct and prevent future abuse incidents provides some comfort.

Who is a part of the USA Gymnastics Scandal?

The most prominent name in the current investigation is Larry Nassar.  Larry Nassar was a member of the USA Gymnastics medical team from 1986-2015.  Beginning as an athletic trainer, Nassar eventually became the national medical coordinator for the organization. In addition, Michigan State University (MSU) employed Nassar as a team physician and assistant professor beginning in 1997.

Allegations of abuse started in 1997 at John Geddert's Twistars Gymnastics.  In 2000, another complaint was filed by an MSU gymnast, however no charges came of the allegation.  Another MSU graduate complained of sexual assault during a medical examination in 2014.  After being cleared of any wrongdoing, Nassar retired from his position as medical coordinator, but remained the team doctor for women's artistic gymnastics.

On August 29, 2016, Rachael Denhollander filed a criminal complaint against Nassar stating that he molesting her during medical visits.  After she came forward, an estimated 118 additional women filed charges against Nassar for sexual abuse and molestation.  Many of these women were collegiate athletes and members of the USA Gymnastics organization during the abuse.

How does a sexual predator evade the law and USA Gymnastics?

Reporting allegations to USA Gymnastics is a duty of professional members and club owners  However, some complaints were filed away with then-USA Gymnastics President, Steve Penny, citing there was no need to report as a third party to an allegation.  Only complaints directly from athletes and parents were being taken seriously.

Wouldn't it be great to be able to rid the world of child abuse of all types?  Unfortunately, that is not the world we live in.  Our world is corrupt and twisted.  Predators will always exist, and a USA Gymnastics scandal will always be possible - just as a USA Soccer, Hockey, or other sport that a power/trust and coach/athlete relationship exists within.  However, we can put a stop to the quantity of victims by stopping predators immediately.

What is USA Gymnastics doing to prevent child abuse? 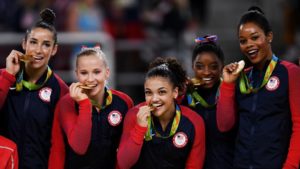 USA Gymnastics hired an independent specialist to perform a comprehensive, independent review of its handling of safe sport matters.  As a result of this report, USA Gymnastics adopted 70 recommendations to strengthen their SafeSport policy.  These policies include requiring members to take the USOC SafeSport class. In addition to education, members must immediately report suspected sexual misconduct.  Reporting now goes beyond USA Gymnastics to legal authorities as well as the US Center for SafeSport.

Additional policies, such as athlete welfare, travel policies, locker room policies, and more, are being distributed to members.  These policies are built to protect athletes and alert bystanders to warning signs as well as grooming behavior.

If we can recognize and respond to abuse, the reach of predators will be shortened and our athletes, members, and all children will be safer.

What are clubs doing to prevent child abuse?

Many clubs have been implementing policies to protect children for years.  When interviewing a potential program, here are several things to look for.

What can you do to prevent child abuse? 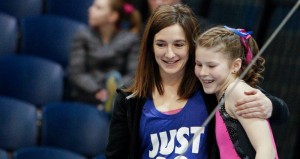 Writing this piece was a true challenge.  I am disgusted by the sexual abuse that has occurred within our sport.  I have been involved in gymnastics since I was 6 years old.  I have never witnessed or suspected that anyone in my circle has been a victim or perpetrator of child abuse.  That being said, it clearly has happened.  I do not believe the abuse is directly related to our sport.  Instead, I believe that predators have gotten away with more than they should have due to a lax in recognizing and responding to warning signs.

Look at the facts, abuse has been documented in nearly every sport: soccer, hockey, amateur, collegiate, just about every sport and level imaginable.  Coaches have abused their power and trust to form an abusive relationship with a student or athlete.  However, we can do something about it.  Through our education and policies, we can recognize and respond to abuse in the early stages.  Thus, we will reduce the number of victims both in and out of our sport.

USA Gymnastics is setting a new standard for behavior - including additional screening, education, or reporting standards.

While we can get angry with USA Gymnastics, let us also point out that those clubs not within the USA Gymnastics Club circuit are not subject to any regulation.  This means no background checks, no required education, no "do not employ" list.  Clubs operating outside of USA gymnastics are at a far greater risk for abuse than those within.

This USA Gymnastics Scandal is unacceptable.  It is time for us as club owners and coaches to recognize and respond to all signs of abuse.  Whether it be verbal, emotional, or sexual - it needs to be interrupted and reported.  Together, we can stop predators from abusing the next generation.