Go for the Quad.  Takeaways from the 2018 Olympic Games That Inspire Gymnastics Coaches

Go for the Quad!  Takeaways from the 2018 Olympic Games That Inspire Gymnastics Coaches

The 2018 Olympic Games have come to a close.  In the sport of gymnastics, the Olympics are the top echelon of achievement.  The number of gymnasts that are chosen to represent the Unites States (4 team members and possible individual qualifiers every 4 years) pales in comparison to the millions of athletes attending gymnastics classes and competitions year-round.  The winter Olympics have many sports with similar characteristics.  From figure skating to curling, winter Olympic athletes rise from small town rink rats to international super stars.  Watching these everyday people capture our hearts and TV screens opens up the gates for us to learn a secret or two of their success.

Figure skating is a highlight for many at the Winter Games.  For those that have attempted to ice skate, watching skaters twizzle, jump, and dance across seems death-defying.  In the 2018 Olympics, the road to a medal appeared evident – go for the quad.  Yes, jump up into the air spin around four times and land on one foot.  Oh yeah, and make it look easy while you do it! 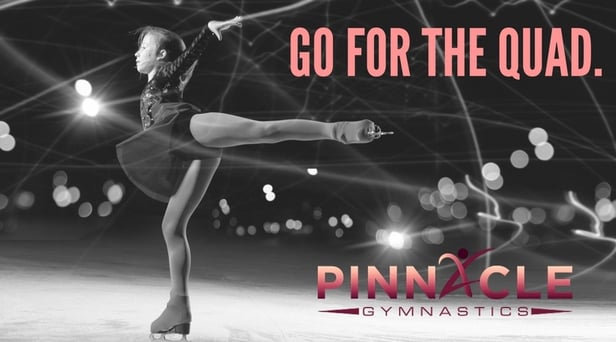 The commentators made it clear: you earn more points going for the quad and falling, than performing an easier jump successfully.  Let’s take that same advice to gymnastics.  Gymnasts earn points or in many cases lose fewer points the bigger the skill is.  In Level 7 women’s gymnastics, if an athlete casts to handstand over the bar, she loses five tenths of a point.  If they cast to horizontal and stay on the bar, she loses eight tenths – three for not going all the way up to a handstand and five for not meeting the special requirement of cast amplitude.

Take a risk.  Go big.  The odds are you will end up happier with your performance when you take a chance doing your skills as big as you can do them rather than just trying to stay on.  This will lead to long-term future success as your attitude at competition and practice will be pushing you to higher levels.

2. A New Definition of Impossible: Has Yet to Be Accomplished

In some minds, those things were to date, impossible.  However, these Olympians do not believe in that word.  Nothing is impossible.  Sure, some things have not been accomplished yet, but doesn’t that give us even more of a reason to reach for the stars?  The Olympic athletes reach so high and train so hard that they make the impossible achievable. 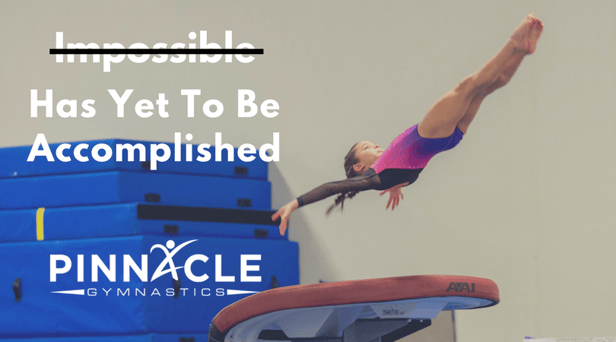 Simone Biles redefined gymnastics at the 2016 Olympic Games.  Her floor routine contained harder tumbling than ever done before, including a skill named after her.  Prior to Simone, many might have said that floor routine was impossible.  But this is what the Olympics reminds us – if we dream it and believe it, we can achieve it.  Gymnasts constantly push themselves to learn new things.  There are new skills added into the Code of Points every year – many by high school age children! Having a growth mindset allows gymnasts to push toward their goals no matter how much work might be required to eventually reach them.

The USA sent 244 athletes to the 2018 Olympic Games.  Of those, 37 athletes brought home an Olympic medal.  The Olympics are not about winning medals.  They are about performing at the highest level of your sport.  They are about uniting for a common purpose.  Olympic athletes walk away with so many memories and very few of them involve a medal.

Athletes from across the world strive for their personal best.  Many of them reach them at the Olympic games.  The best push each other to be their best.  Thus, we see so many unbelievable performances.  Just like when Mirai Nagasu became the first American female to land a triple axel in the Olympics. 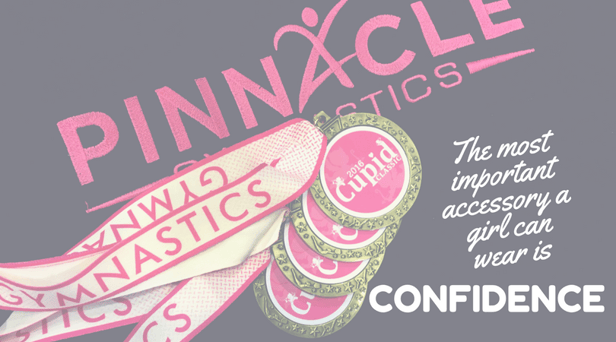 The true takeaways from the Olympics are the life lessons learned to get yourself to the highest level of your sport and the relationships that you make along the way.  The people and the process have more of an impact on the rest of these young athletes’ lives than any amount of bling around their necks.

Sure, it feels good to win a medal, even in gymnastics.  It also feels good to contribute to a team.  To make a new skill.  To conquer a fear.  Gymnasts train year round.  Most have the opportunity to compete between 5 and 10 times per year.  When they compete, they get one chance.  Sometimes that one chance is the best the athlete has.  Sometimes an athlete falls or misses a connection.  How that athlete places depends upon her age, level, and the meet she is attending.  Tracking success based on medals is like comparing apples to oranges.  The only true way to track progress is to watch as athletes progress into new skills while having fun and learning the life lessons that will carry with them way past their last competition.

What if you apply these takeaways to the workplace.  If you put your very best effort into each project, customer, or interaction with your co-workers, your long term success is going to see positive results. Go for the Quad.